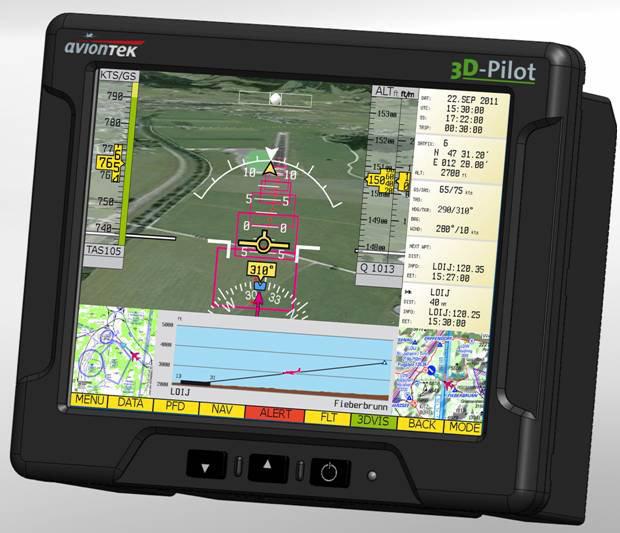 AvionTek GmbH developed the 3D-PILOT as product of a low-cost system (including hardware, software, and a database) that assists general aviation pilots in landing safely on small and poorly equipped fields under bad weather and low visibility conditions.
Most accidents during flights under visual flight rules (VFR) in general aviation occur due to the pilot’s loss of orientation and resulting loss of control in the landing phase, or a loss of situational awareness that leads to a controlled flight into terrain (CFIT).

Therefore, there is a large impending demand for 3D add-on navaids with synthetic vision (SV) and guidance for general aviation pilots to improve the safety of VFR and IFR (instrument flight rules) flights. The 3D-PILOT monitor visualization is depicted in the figure.
Current satellite positioning devices in the low-cost market offer not only 2D moving map navigation, but also new 3D navigation technology using high-precision satellite positioning with tunnel and predictor guidance. In addition to the software, a 3D navigation database needs to be developed worldwide and designed in different levels of detail.  Chapter 10, Annex 15 of the ICAO – as well as other aviation organisations – also recognise the requirements for states to provide “digital data on aerodromes and vicinity terrain that includes obstacles”. The AvionTek 3D-PILOT products respond to a number of corresponding needs: pilot demand for safe VFR and IFR flight and landing, as well as demand for safe flying/landing at 2,000-plus European airports in general aviation without ground-based navigational landing aids and 30,000-plus airports worldwide based on precise autonomous 3D navigation.